No travel is complete without experimenting with the local Cuisine. Pondicherry brags to have the French cuisine, the Indo- French cuisine and the South Indian cuisine .The added advantage of being a coastal area gives it a foothold on sea food as well. Honestly, I am a conventional non- vegetarian, as I am allergic to red meat and I don’t relish sea food, so that leaves me with not much choice save Chicken. Fortunately, the French Bakeries had amazing things to choose from. I devoured at many places but make a mention of a few places I liked below:

This Café looked very homely and inviting with a Bohemian setting. There was something very endearing about a young boy carrying the huge menu board around; there were no typed menus!  The Menu for the day had Petit Pate, Shrimps and Julienne de Legumes as starters. The place was crowded and rushed, it being 31st of December. Yolande came to take our order when I explained my conventional non-vegetarian taste but I insisted that I wanted to have a good French Dish – he sent the cook to speak to us. The cook made a wonderful chicken dish. He made chicken in wine and some weird sounding French sauce (I don’t remember the name) with rice. He also sautéed vegetables on the side. Though it doesn’t sound much, but trust me; this was one of the best meals I have had in a long time. Perhaps, it was the celebratory air or the ambiance which did the trick, but it was amazing!

Yolande had called a French Salsa teacher, Fred Lassere, who was teaching the people how to dance. So it was a wonderful way to welcome the New Year.

Anyone looking for an unassuming place which is not ostentatious but has good food must surely come here.

Anybody visiting Pondicherry can’t miss this Café on the Promenade. The best part is that it is open 24 hours, and the outside sitting area is so close to the sea that you can enjoy the sea waves crashing with your cup of coffee. There was something ethereal about the sight of the magnificent sun rising from the sea, after witnessing the glorious sun rise we walked into the Café for Breakfast. Sipping my coffee and biting into my croissant with the sound of waves as the music, was a scene out of my own dream-book.

This restaurant is in Auroville. The first thing you notice here is the Huuuuge clay oven being used to bake fresh pizzas. The menu has French dishes also, but basically this place specializes in Italian. The dessert, Panna Cotta with chocolate sauce was delectably delicious. Auroville has many good restaurants with authentic cuisine.

The best part about this place was its narrow gallery overlooking the street. It is a French patisserie but also offers a food menu. Surprisingly, their Biryani was very good.

I can’t finish my trail without mentioning this Café. The heavy woodwork inside is worth admiring. This place is run by a Family. Where the father does most of the cooking including making his own ice- cream. This Café has its own cyber area, where you can sip your fragrant beverage while checking your email.

However, Beware you are forbidden to wear your foot-gear inside. So if you don’t mind removing your shoes and hanging out, this is the place to be! 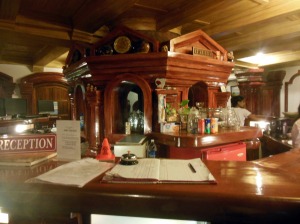 Renamed ‘Puducherry’ in 2006, this coastal union territory packs a punch in terms of an unreal experience. Something about ‘Puducherry’ could not conjure the same image as ‘Pondicherry’ for me, if you ask me the reason for it, I wouldn’t know.  Interestingly, it seemed that the locals and the people in Tamil Nadu were also bitten by the same bug and they continue with ‘Pondy’ and ‘Pondicherry’, as if the change means nothing to them. But as Shakespeare pointed out, what’s in a name?

Travelers looking for peace and quiet would love Pondicherry. However, anybody expecting a Goa like party frenzy will be disappointed; this is a place to spend time with yourself and in many ways to find yourself again.

Unlike my usual trips, I decided to travel blind, where I did not research like I usually do and just randomly made a plan to go to Pondicherry; I guess I wanted to be surprised. Mind you, we were travelling there for the New Year and we hadn’t even made our hotel reservations (which is a dumb thing to do, but I wanted to do something I hadn’t done before). I was travelling with a friend so it wasn’t that foolish, but foolish nonetheless, knowing how crowded the place would be.

We took a bus to Pondi from Chennai. After the three and half hour bus drive, we reached Pondicherry, and that is when I started hyperventilating. The place was awash with tourists, and every place we went to had no rooms available. The thought uppermost in my mind was, would we never get a place to stay? After a three hour search we finally managed to book into a very comfortable budget hotel on the Captain Marius Xavier Street which was not very far from the main square.

After thanking our stars for coming to our rescue we quickly grabbed some food and set out to explore this fascinating melting pot of cultures.

The Extraordinary Architecture: A Feast for the eyes!

What stood out was the architectural divide! The French rule which ended in the early 60s had a profound effect on the architecture and the plan of the town; all the streets have retained their French names .

The largest square in the city, Government square, is surrounded by all the public buildings, which can easily be labeled as the heart of the town. Wherever we went, we crossed this square at least twice a day.

In the colonial times, the city was divided into the White town and the Black town, interestingly, this can be still perceived in the architecture. The White Town (popularly known as the French Colony), is by the sea side, all the buildings are inspired by French Architecture ( usually yellow or orange) 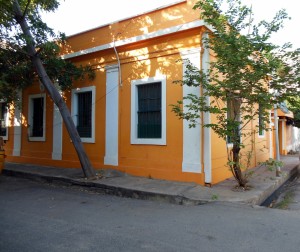 which makes the whole experience of walking around them remarkable, as soon as we move a little further, we can see the buildings that are Franco- Tamil and which mark the Tamil Quarter. It was fascinating to see the changing look of the buildings.  Moving further was the Muslim Quarter characterized by mosques.

Even the churches have a Franco- Tamil feel to them 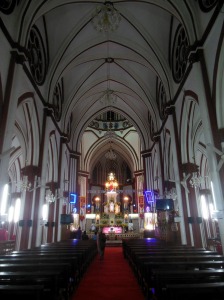 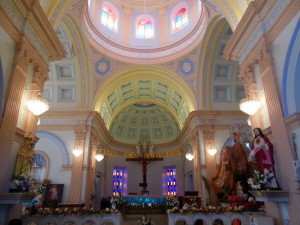 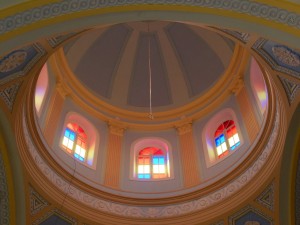 The Promenade beach overlooking the Bay of Bengal is the most crowded and the most frequently visited beaches in the city. Its promenade is long and is surrounded by the White town on the other side, the promenade houses the most important memorials and statues.

The other beach, the Serenity Beach was a typical fishing beach with fishing boats and fishermen et al, unlike its name; it’s not very serene and is usually crowded, so there is nothing which can pass for a quiet and private beach around the city.

The Auro Beach was also crowded with the local people and the fishermen were selling freshly cooked fish in small shacks. The locals explained that after the Tsunami raised the water level the beach here does not exist per se, a small strip of sand passes as the beach. 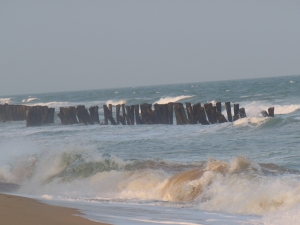 The highlight of my sojourn was a day trip to Arikamedu in Kakkayanthope, which is about 7 kms from the city.  This was a Tamil fishing village which archaeologists claim had trading ties with Rome in the pre- historic times; it was an important centre in bead making. Riding through the quiet south Indian village of Kakkayanthope (on a Scooty) was an experience I will never forget. The site looked abandoned and deserted with not  a  single soul present, after about half an hour we spotted a local on a bike; we stopped him to ask a few questions. He enthusiastically informed us how the ancient Arikameduans used an underground tunnel to transport their goods to a nearby port which would then be sent to Rome. The tunnel in question was covered by a thick covering of trees and vegetation.

It was a surreal experience to stand at the very place, which despite being a quiet South Indian village had made a mark as an International Centre for bead making in as far back as 200 BC!  I could envision the bygone era… feel it in my bones. Today, the village has fallen into obscurity and the main site has been taken over by the Archaeological Survey of India. The artifacts, coins and pottery excavated from the site are displayed in the Pondicherry museum and some have been sent to the museums in Italy.

Like all the cities in Southern India, even this one was full of temples and shrines. The most remarkable feature about the temples in South India is that they are ostentatious and flamboyant, in a good way. Most of temple domes depict a scene from the Ramayana on the outside whereas the temples in the north have all the depictions on the inside. 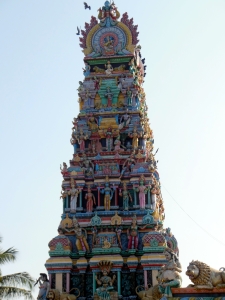 No post about Pondicherry can be complete without the mention of the ‘Ashram’; the building is small and looks quite unassuming from the outside. But as soon as I went inside, I was struck with stillness, it seemed like time stood still and all my worries and inhibitions left me. The peace and serenity engulfed me as I sat there for about two hours. The energy in that place was poignant. Even now, while writing, I can feel Goosebumps on my arm just thinking about that place.

My next post will cover my gastronomic adventures and obviously Auroville!!!!