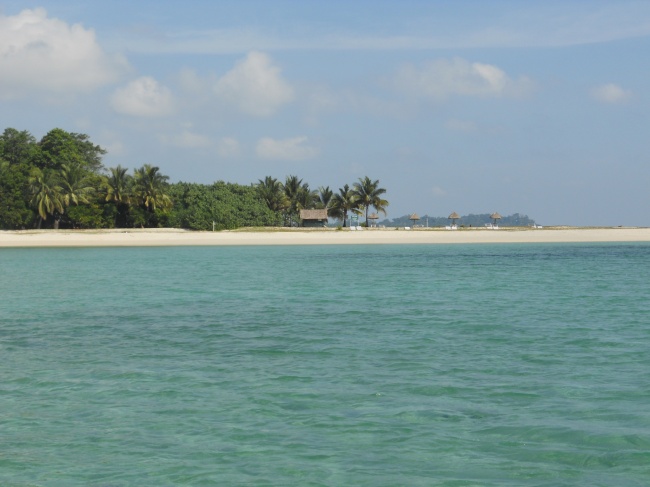 We started off with a trip to Andaman and Nicobar Islands but soon realized that there was no Nicobar to visit because the tiny archipelago was made tinier by the Tsunami that rocked the Pacific Islands in 2004.

I will admit that I am a little conventional in a way and I like to fully prepare myself about a place before I travel, I read travel blogs and travelogues about it. But nothing had prepared me for the real Andaman! What awaited us there was an experience beyond mere words. Not only was it aesthetically beautiful, it being an archipelago, the view from the airplane window before you land on the Veer Savarkar Airport in Port Blair, is beyond compare. It was culturally, anthropologically and even geologically unparalleled to anything I have ever seen even on Discovery HD.

It will take me posts and posts if I tell you the  complete story of Andaman as I saw it, so I will stick to a cursory view of the island. The promenade around the ocean in Port Blair is thrice the size of the much talked about Marine Drive and ten times more beautiful. Anthropologically, it hosts many tribes, the Jarawas, Onges , Sentinelese etc  which despite the advent  of a nuclear world live in absolute ignorance of the world around them. I mean they operate in a parallel universe because their civilization has not progressed from the Cavemen stage. This is astounding. No? Imagine! They haven’t heard of TV and yes our very own ‘the Internet’ is a mystery to them.  I saw hordes of anthropologists visiting the island and studying their culture.

In the Colonial times, this island was used to dump the political prisoners, and it earned its moniker “kala-paani”. The Cellular Jail made me think that how can some place so beautiful be marred by so much bloodshed? On a tour of the jail; the place where the prisoners were hanged is also pointed out. Many people who fought for us; died here.

To cover the whole chain of islands, we decided to hire a car. We drove through the whole expanse of the archipelago, the local ferries would ferry the passengers and their vehicles across the water. It was pure joy to watch gas cylinders being ferried from one island to another. One thing which really intrigued me was that every little town had a library. The public libraries in the bigger towns were often huge buildings, that says a lot about the people there.

The Beaches! Where do I even begin? The Havelock Island had its own immigration office (which was a cute little hut), a lot of tourists moor their yachts and use speed boats to come to the island and enjoy the beach and for water sports. With coral reefs to explore; Andaman has made a niche for itself in water sports.  The Ross and Smith Islands are twin islands off the coast of North Andaman (picture above); the sight of them emerging when you drive towards them in a speed boat is unsurpassed.

I will never ever forget the sight of underwater life; the scene I saw when I snorkeled on the Jolly Buoy Island. I saw a school of sea anemone fish (the clown fish rather Nemo, if you will ). It was like watching Nemo come alive. This school was attempting to hide in a sea anemone.

There is so much to cover the cuisine, the museums and more beaches; which keep getting better… When you think that nothing can be more beautiful than this; you come across something twice as beautiful.

So! If you ever think of an Island holiday; don’t forget we live close to one of the best in the World ( even though it is unexplored; which adds to its allure)!!!!